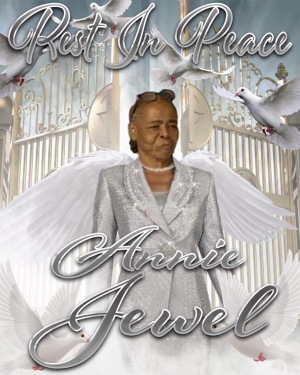 Visitation will be Wednesday, August 19, 2020 from 5 PM to 7 PM at New Holy Temple Church of God in Christ.

Graveside service will be held on Thursday, August 20, 2020 at 11 AM at County Line Cemetery in Slocomb, Alabama.

Annie Jewel Dawkins was born September 16, 1945 to the late JW and Mary Dawkins.  She was born and raised in the Jellico Community in Houston County and, later, moved to Slocomb, Alabama in 1966.  She attended and graduated from Grimsley High School in Ashford, Alabama.

She accepted Christ, at an early age, at Sardis Missionary Baptist Church.  She, later, moved her membership to New Holy Temple Church of God in Christ, where she was a faithful member for over 50 years.

She worked at Extendicare Health Center, in Dothan, Alabama, for over 25 years and also worked another 20 years at  Westside Terrace until retirement.

She was a loving mother, grandmother and a dedicated caregiver to her younger sister: Mary Alice Dawkins.

She is preceded in death by her father: JW Dawkins; mother: Mary Dawkins; two brothers: Douglas Dawkins and Robert Dawkins; one sister-in-law: Georgia Dawkins; and one brother-in-law: Frank Craig.

To send flowers to the family or plant a tree in memory of Annie Jewel Dawkins, please visit our floral store.